Composed by Gerasimos Siasos, the Four Steps From Epirus is a music piece for Epirotiko Defi, which is a medium-diameter frame drum with jingles from Epirus – the North West region of Greece. Being a novel and innovative work considering the Greek state-of-the-art in the field of the frame drums, the piece in scope aims to show the drumming capabilities of Epirotiko Defi while broadening its playing perspectives. Additionally, the Greek traditional playing techniques are presented and analyzed. Also, techniques of similar frame drums of other cultures are adapted so as to meet the playing specialness of the Greek frame drum and adopted respecting the distinctive sound color of Epirotiko Defi.

“Gerasimos Siasos has composed great music for frame drums “four steps from Epirus” and it is an excellent form of learning frame drums which is traditional and original”.

Composed by Gerasimos Siasos, the “ζ΄” is a Riq solo which is developed based on a Greek rhythm (7/8), similarly to the solo for Epirotiko Defi “Four Steps From Epirus”. Additionally, playing techniques, which originally introduced by musicians of different cultures, are presented and analyzed.

Composed by Gerasimos Siasos, the “θ΄” is a Bendir solo which is developed based on a Greek rhythm (9/8), similarly to his previous solos “Four Steps From Epirus” and ” ζ’ ” for Epirotiko Defi and Riq respectively. Additionally, playing techniques, which originally introduced by musicians of different cultures, are presented and analyzed.

15 Solos compositions by Gerasimos Siasos, developed on the basis of Greek and Arabic rhythms. Additionally, playing techniques, which originally introduced by musicians of different cultures, are presented and analyzed.

Composed by Gerasimos Siasos, the “in 7” is a big size frame drum solo which is developed in 7/4 rhythm, similarly to his previous solos “Four Steps From Epirus”, “ ζ’ ” and    “ θ΄ ” for Epirotiko Defi, for Riq and Bendir respectively. Additionally, playing techniques, which originally introduced by musicians of different cultures, are presented and analyzed. 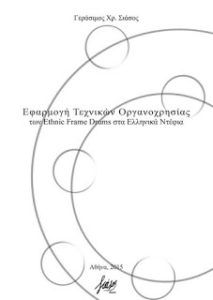 The Method presented here has been adjusted to the educational needs of the modern teaching techniques which include, the creation of motives for learning, use of the multi sensory method during tuition, and the development of a critical mind. For the Documentation of Sounds and Techniques we use signs taken from the European Music Notation, as well as original signs, in order to help out musicians who derive from a variety of different musical traditions, to become able to read the sheet music easier. The Objective for the present Method is to become a useful tool for every student of every Music School, that’s involved with the teachings of the traditional percussion instruments, but also to become useful for every other Musician who wish to extend his knowledge regarding the new techniques applied in the use of the Greek Tambourines.

Preface Method by Glen Velez:
“This book is an important contribution to the art of frame drumming. With carefully thought out material, explanations and progressive exercises, it provides students with all the essential techniques to be an accomplished player.
It has real practical value for the player who is just starting to explore frame drums as well as the advanced player who wants to enhance their skills. The range of information is exemplary and is laid out in a format compatible for beginners or advanced players.
Of course nothing can replace guidance by a good teacher, but this book certainly can be a valuable companion for any journey into the world of frame drumming.
The authors background as a successful performer and teacher makes him an ideal creator of this ambitious and much needed work.
I am sure many students of frame drumming will derive great benefit from the study and immersion in this intensive presentation of frame drum techniques.”

The Authorship of this Method regarding the Toubeleki, as well as the previous Method “Implementation Techniques of the Ethnic Frame Drums in the Greek Tambourines”, is the result of many years of research and educational efforts based upon both Greek and International bibliography, it’s also based upon information and systematic observation of local Toubeleki Musicians through out the Greek country side. Moreover in this particular Method we suggest and we analyse the use of specific techniques from similar Membranophone Tambourines. We also examine the usage of the Frame Drums from other musical cultures and observe how they can contribute in the evolution of Toubeleki playing techniques as a “counter loan” between musicians. This Method like the previous one has been adjusted to the educational needs of the modern teaching techniques which include, creating the motivations for learning, use of the multi sensory method during tuition, and the development of a critical mind. In order to document the sounds and techniques for the students, or any other musician who wishes to enhance his knowledge regarding the new techniques of use in the Toubeleki and have as less trouble as possible in “reading” the sheet music, we use elements from the European Music Notation as well as original signs.

The Book I’ve Authored, presented here, constitutes a follow up in the “Method of the Traditional Percussion Instruments: Toubeleki I”. In this Method we exhibit techniques of playing the Toubeleki, which have a progressive degree of difficulty, through complete compositions specially designed for this particular instrument. These techniques are being used from traditional musicians but they also contain “loans” from advanced techniques of different Frame Drums such as, Riq, Tar, Bendir and others. In the Method presented here “Toubeleki II” we follow the same way as with the previous Methods of the series “Method of the Traditional Percussion Instruments”, for the correct depiction of the “strokes” applied on the instrument, in order to produce certain sounds. We use specific and clear directions and Music examples that analyses the way the fingers work upon the main body of the instrument. For the Music Documentation of the Method we use elements from the European Music Notation as well as Originals signs which are being thoroughly explained in a specific chapter in order to help the students, or any other Musician who wishes to enhance his knowledge regarding the Toubeleki, to read the Sheet Music as easier as possible. This way the student can focus his study in each technique and through the exercises and the “pieces” given to him in the Method (Solos & Duos) he can successfully incorporate them in his personal style of play.

My Authorship in this Method entitled “Method of the Traditional Percussion Instruments: Riq I” is the follow up of a systematic effort that began in 2000 with the composition of two other Methods called “Implementation Techniques from the use of Ethnic Frame Drums in the Greek Tambourine” and “Method of Traditional Percussion Instruments: Toubeleki I”, whereas i was trying to point out the Solo capabilities, of the Traditional Percussion Instruments. This body of work is the result of a multi annual research based solely in International Bibliography as well as information and observations from my participation in Seminars, Workshops and Masterclass with esteemed personalities from the educational field of World Music such as, Glen Velez and N. Scott Robinson. The Main object is the analysis and how to become able to use the Techniques from similar Membranophone percussion instruments played by different Musical Cultures in order to finally enrich the evolution progress of the Riq instrument. In the Riq Method we apply the same Modern Educational Principles which include, the creation of motives for learning, use of the multi sensory method through out the tuition, and the development of a critical mind. Another crucial objective is the documentation in written form of the different “Strokes” and Techniques applied, in order to limit the anxiety from the memorizing procedure’s of the Oral Tradition, which haunted the students up until recent years. The Final objective is for the Riq Method to become a useful tool for every student of a Music School that’s involved in the tuition of the Traditional Percussion Instruments and specifically the Riq. 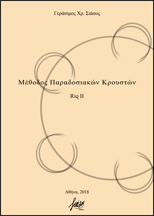 This book is a follow-up of the “Method of Traditional Instruments Riq I”. In this Method are presented, with progressive difficulty and through integrated compositions and studies, techniques of use of musical instruments, specially written for Riq, which are used in the traditional way of playing the instrument and borrowed from sophisticated techniques of various frame Drums. (Tar, Bendir, Kanjira, Tombak)

For the correct performance of sound – tapping on the instrument, targeted and clear instructions are used, as well as musical examples, thus analyzing how to use fingers on the body and zills of the instrument. For the musical recording of the Method, elements of the European Musical Notation have been used in this Method, as well as original signs, which are explained in each section, aiming at the easy reading of the sheet music by students or musicians who wish to acquire additional knowledge regarding new techniques about the use of Riq.

In this way, students can focus their study on every new technique and through exercises and pieces included in the Method, they can successfully integrate them in their playing.

The Translation in English was made by Panayotis Gikas